The Weight of the N-Word: A BSU Trill Talk 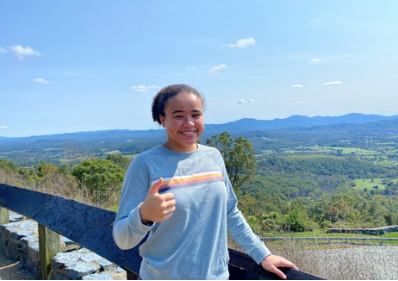 Casper discussed her struggles with identity in the Black community.

On February 18, the Black Student Union held an in-depth trill talk about the N-word and its history. Panelists Chavito Allen, Frida Almaguer, Mary Casper, Cam Hyde, and Evan Nied, along with host Jada Jones, led the discussion. During the presentation, the N-word was defined as “a racial slur that has been historically directed towards African Americans to dehumanize and invalidate.”

Throughout the trill talk, panelists dove into the connotations surrounding the N-word and how they felt about it.

“The N-word was something used to reinforce the fact that black bodies were ‘inferior’ and did not meet the requirements to a human being; a limit that was put on their existence, that no matter what you do in life, you can not get to this point of success,” said Allen.

Allen went on to explain both the history of the N-word and the modern reclamation of it.

“[Reclamation] is the cultural process by which the specified group reclaims words, ideas, and artifacts that were previously used in a way that was disparaging to the group,” he said. “Applied to the N-word, the use of the N-word by non-Black individuals represents a blatant disregard for the importance that a reclamation holds within the African American community.”

Many agreed that the word shouldn’t be used by a non-Black person as it carries a deep-rooted weight in society.

“I do not believe that people from other races or ethnic backgrounds should be allowed to say it,” said Almaguer. “As a Latina, I witnessed people who are [a] part of my ethnicity say it, and it’s very degrading.”

Casper shared a similar sentiment having experienced the N-word used outside of reclamation.

“I grew up in an environment where sometimes… kids that were white would say it in a song,” said Casper, “I always thought it was awful because when you learn the background of the N-word and how it was used to put members of the Black community on the lowest of lows in society, it’s really disgusting.”

However, the use of the N-word goes beyond personal life. Once the discussion was opened to attendees, Kalysa Blunt brought attention to another issue.

“It’s something that definitely needs to be recognized in Kempsville and in classrooms because it is unacceptable that these slurs, any slurs as a matter of fact, [are] used in our hallways,” said Blunt.

She continued to describe her experience with the usage of the N-word in the school setting.

“When we were back in school, I heard the N-word in the halls every single day… I’ve heard it used against me, towards me. They’re like ‘oh you’re mixed, you can say it too,’… and it’d be funny to them. They’d want me to say it,” said Blunt. “They’d jump through any loophole to get me to say something I did not feel comfortable saying… I had these people coming up to me, saying the N-word to my face, and when I said I was uncomfortable, they said it’s just a word and that it’s not offensive if they’re not white.”

Assistant Principal Darryl Johnson weighed in from his perspective as a school administrator.

“If people only don’t do things because [it’s] the rule, that’s not a success,” said Johnson. “If a person just doesn’t call you the N-word because they’re going to get detention, if that’s all that’s stopping them, then we still have room for growth.”

Jones also gave her opinion on the N-word and why it digs so deep into society.

“There’s no real hierarchy [of slurs] in the universal sense, but when it comes to America, that word is so strong because… the Black person oppression has been so prevalent in our society,” said Jones.

As the discussion continued, the topic moved toward common stereotypes and expectations associated with the Black community.

“Being mixed,… I’ve struggled with my own identity and my connection to my strong Black history because for a very long time, people have said to me, ‘I’m more Black than you’… [or] ‘you’re all white.’ I’ve heard that being said to non-mixed [people], to Black kids in general, and I think…we need to [move] away from there being a… one type of Black,” said Casper.

Trill Talk attendees also brought up the ‘N-word pass,’ which is when a non-Black person is given a ‘pass’ to say the N-word.

Many agreed that implying there is a ‘pass’ diminishes the deep-seeded history behind the word.

“The N-word pass does not exist, and you can not assume that you have it,” said Casper.

Simply put, the lack of education on the N-word perpetuates ignorance not only within the halls of Kempsville High School, but also in society itself. The N-word acts as both a powerful and harmful piece of Black history, and those who refuse to acknowledge that often hurt the Black community.

“I think the beauty of being Black is… that we do have that rich history and that being Black is beautiful, no matter what type of Black you are,” said Casper.