The Last Game: Student Athletes’ Seasons Come to a Close 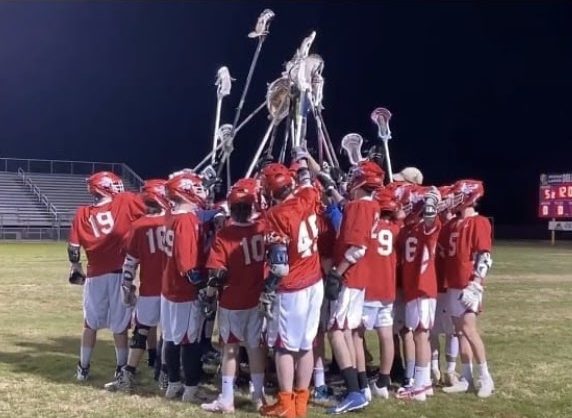 A lively moment as the boys lacrosse team huddled together after a difficult game against Ocean Lakes.

The lights illuminate the field, the crowd’s cheers and clapping echo throughout the stadium, jerseys fill your vision, and a whistle catches your attention. The game is over; however, unbeknownst to everyone, the season, too, is also over. The place where people spend five days a week, where jobs are held, and where bonds are made, has been closed. Friends, classmates, and teammates make eye contact and hold conversations with each other, not knowing that could possibly be the last time to do so.

With the early cessation of the school year, sports teams, both inside and outside of school, have been affected.

Gage Baron, a junior, is a second-year lacrosse player who was introduced to the sport by a friend. Despite only having a couple of games and scrimmages, Baron has slowly seen the dispatch of his team.

“In the aspect of the team, we haven’t really seen each other since the lockdown. I guess you could even say… we’ve grown a little apart because we haven’t seen everyone for a while. Due to lacrosse being a club activity, to actually participate in playing, you have to pay a fee anywhere from $100 to $200 dollars so at the point we’re in, it probably would seem like a waste of money to a few people,” Baron says. “If there’s one thing I miss the most about the season, it would have to be between hanging out with the whole team and playing with my friends. Also, the competition I had with the other schools and the rush when you’re out on the field and the enjoyment of playing the game is another thing.”

Although sports involve the showcase of skills from the athletes, the coaches who teach those skills are shown through the movements, decisions, and actions from those athletes. It is no surprise that coaches also seem to be distraught about the seasons ending. Baron says, “from what I know, Coach [Absalom O’Neil] feels horrible about it, he loves lacrosse with all his heart and it’s heartbreaking to him to have this season go away and that we can’t finish the game. I truly feel like he was devastated when he heard the news and he was really looking forward to the season so it was a big letdown for him.”

O’Neil wrote in a post to the lacrosse team’s Instagram, “I play the game because, from the minute I started playing, I loved it. It was a sport where you didn’t have to be the biggest player to be successful. Practice hard, study the game, and be proud knowing you play the fastest game on two feet.”

Whether it be a sport, a school subject, or an activity, practicing and setting goals can help one show progress and continue to grow. In comparison to individual sports, for example, wrestling or tennis, Lacrosse is a team sport that requires multiple people to play. For that reason, it can be difficult to practice without teammates.

Baron says, “Coach [O’Neil] told everyone to get their practice in when they can as long as you have the ability to do so. I’ve practiced some since the lockdown but it’s hard to get as much practice as one would want without having people to help.”